Hi, everyone. I’m not actually Danelle’s book-hero from CAPTAIN OF MY HEART, though both my registered name and my call name are in homage to him. I’m not Irish either, but German-American … heck, I’m not even a human, but a dog. A talking dog. A German Shorthaired Pointer dog. Mom gave me my very own space on her website to provide a light-hearted and personal look at the life she shares with me and other members of our pack. Maybe you’ll find an animal care tip here. Or a recipe on how to make dog biscuits. Or yet another photo of me. I’m rather shy about that, as I don’t much like to have my picture taken. My show photos prove it.

So, a little about me. Like the fellow for whom I’m named, I’m tall, strong, brave and, if Mom’s to be believed, rather nice to look at. I’m easy-going and uncomplicated, though I do like to hunt… not British merchant ships, but squirrels. Birds. Rabbits. (I honestly don’t know if they’re British or not. I don’t really care.) I’m always in motion, I get things done (did you know I’m an AKC Champion of Record?) and I’m loyal and protective. Unlike the Brendan of Mom’s books, though, I don’t like water. Actually (and don’t tell anyone this, or it’ll be a discredit to my webbed feet) I’m afraid of it. But no matter. I have an “in” on all the gossip going on in Mom’s household.

So here’s the latest, though it’s no longer a secret. My mom – my canine one, that is – is about to have puppies, which means I’ll have a whole bunch of new brothers and sisters to play with. Their dad lived a long time ago in a country far away, but thanks to airplanes and plastic bags and something to do with freezers and seamen – did I spell that right? seems the way a captain should spell it – he gets to be a father again, even though he lived in Australia and for the last eight years, in heaven. Mom says he won 28 Best In Shows there and was very famous. I don’t care about that. I just care about having kids around that I can play with!

Mom says I need to get off the computer now. Stay tuned to this space – I can’t wait to share pictures of my new brothers and sisters!

My mom – pregnant with my new brothers and sisters:

I was born in this whelping box! 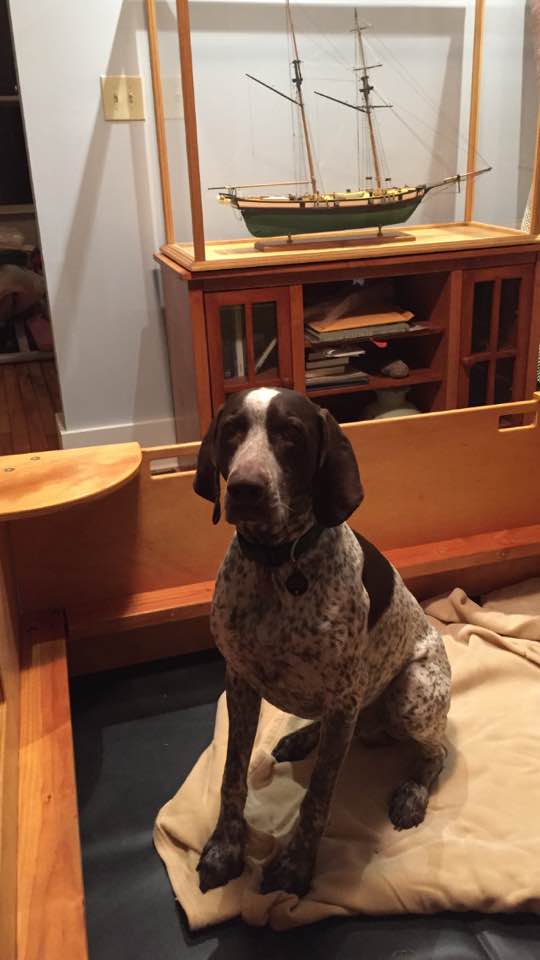